I read this article about augmented perception. One thing I liked about it was the guys who weren’t doing it for any monetary gain, they were just doing it for the experience. They’d devised chips that they implanted in themselves to give them different perceptions. One of them fitted into your sternum, and every time you faced north, the chip would buzz. So it’s like having an internal compass, which a lot of other animals have got. They’ve proven that birds always know where north is, and there’s a theory that humans know where north is, but we’ve stopped listening to that message. We’ve got a GPS in the ambulance but we never use it.

It was a body viewing – somebody’s mum had died and they were viewing the body. The body was in a coffin by the altar, laid out flat, like Dracula or Princess Diana or something. This woman had seen the body and pretended she was dying. In a situation like this death can leap off one person and wrap itself round another person’s heart.

We were completely cool, no emotional reaction at all. But they were freaking out. They had a dead mum in the coffin, and then another one had dropped. Panic had set in, and all the church people were flapping and jabbering.

They were looking at us like we didn’t care, getting irate, doing their nuts in. “Can you not see what’s going on?”

“There’s nothing going on,” I said.

“You better do something, mister.”

I knelt down and took her pulse. It was normal. “If she was in cardiac arrest her heart wouldn’t be beating.”

“Bronchitis.” The crowd reeled off every medical condition they had heard of.

The brother was a bit more calm, a bit more cagey. He sidled up to me as I stood there looking blank-faced at the horde. “Her mother was here last week, now she’s having a stroke. Can you do something please, mister?”

We were physically in the same borough of London, but we clearly had such radically different perceptions of the world that we were barely inhabiting the same place at all. We were in two different zones that overlapped geographically, but not psychologically. It’s like that film, Stalker. We drive our ambulance over the border, and while we can shove pipes into them and shock their hearts back to beating, it’s really hard to communicate in this other place.

My crewmate and I spend more time in the zone than we do in our own lives, with our children, with partners, or down the pub. To show you the madness that goes on in this other zone, they reckon about a hundred people in London account for something like fifty percent of all the ambulance callouts. It’s like they want a gold membership card, or crave a special status or something, a special closeness with their god, the fear of death.

You don’t get taught about any of this in training, about the fakers, the feigners, the attention seekers, the con artists, so it’s a real shock when you first cross over and see it, because to start with you think this is real. These people couldn’t possibly be so mad as to try and cheat the health system. Maybe they think that by cheating the system they’re cheating death.

I did the stretcher at Tottenham Hotspur for five years. I used to sit next to the guy who judged the refs. He was a miserable old fucker, and he’d say, “The ref’s got no chance. He’s on the field with twenty-two cheats. All of them are trying to mug him off.” That’s what the public are trying to do with me. But I got wise to it, like when I see a footballer diving, I can tell if they’re seriously injured or not.

Often we’ll jump out the ambulance in the street and there’s a big crowd of people around someone who’s unconscious, and as soon as I get out, I recognise the cunt, it’s somebody I’ve been to a hundred times before. Even if I don’t recognise them, I know straight away there’s nothing wrong with them. We might only be conscious of a few things at a time, but the brain picks up thousands of bits of information. It even picks up muscle tone and body posture.

I used to get pissed off when people wasted our time, but they reckon there’s a five-year barrier, where once you’ve been driving the ambulance for five years, you accept the job for what it is or you leave, go back to the other zone. Whereas I stuck it out, so I’ve become an observer from a different plane of existence.

What did I tell the family in the church who insisted their sister or auntie had been in cardiac arrest? “The figures for survival rates for somebody who goes into cardiac arrest are something like five percent.”

“Maybe she’s having a heart attack,” her brother said. “Please do something. I beg you.”

A kid came running up the aisle then, he clearly hadn’t been following the script. “She’s having a cardiac arrest.”

“A cardiac arrest is where the heart stops beating and you stop breathing.”

“Are you sure that’s right?” the brother said. “I saw an episode of Holby City, or was it 24 Hours in A&E, and there was a man on there who had been having cardiac arrests for two or three years, and he thought it was indigestion or heart burn.”

“Our ambulance service is set up to respond to cardiac arrests,” I said. “I know them when I see them. You probably don’t believe this, but the whole ambulance service is judged on two things, essentially: first, getting to dead people – which is what they are – in eight minutes. Then two, we’re judged on how many of those dead people we can bring back to life. Most of those dead people are dead for a reason. Forty years of smoking, drinking a bottle of whiskey a day. While we’re charging through the street at 50mph with blue lights on to get to these dead people, there are functioning members of society with broken legs on football pitches waiting three hours for an ambulance. That’s somebody who needs help, isn’t it? Imagine all the other things that are not dead people, and they get pushed to the side so we can race around trying to stop dead people from being dead, or pretending to be dead. Only five percent of people come back when we do the old CPR and the rest of it. Out of that, how many of them actually have a quality of life? A tiny amount. They might have brain damage, they might be bed-bound. The process of doing CPR, the chest compressions, elongates their death. And most of the people we bring back are cabbages. They sit in an IT unit for two weeks while the family comes round and says their goodbyes, then they turn the machine off.”

I picked my bag up and walked out. When I was in the ambulance I wished I hadn’t ended my speech there, because there’s more to it, so I’ll tell you now, and this might be the worst part of all.

The natural way of dying is the heart stops beating, oxygen stops going to the brain, the brain cuts out. As you’re going through that dying process, your head is most likely producing some psychedelic drug, and you might see a tunnel of light or the gates of heaven. Imagine you’re going through that relatively blissful drug experience, and some fucking cunt starts trying to reverse it, and starts pumping oxygen into the brain, and your pleasant death – there are no pleasant deaths – your relatively pleasant death is turned into this brutal forty-minute procedure where a big plastic tube’s being shoved all the way down your throat, and if a Paramedic can’t get a needle into your vein because the vein’s closed down, they drill into your knee and pump fluids into the bone, and somebody’s continuously breaking your chest bone. This is fucking brutal, and I feel sorry for the people for whom it’s their last experience on this planet.

This is an excerpt from Takeaway by Tommy Hazard, published in 2017. A Black Death Edition of this extraordinary, prophetic book is planned for the new year. To make sure you receive a copy, join our print subscription list at Patreon. 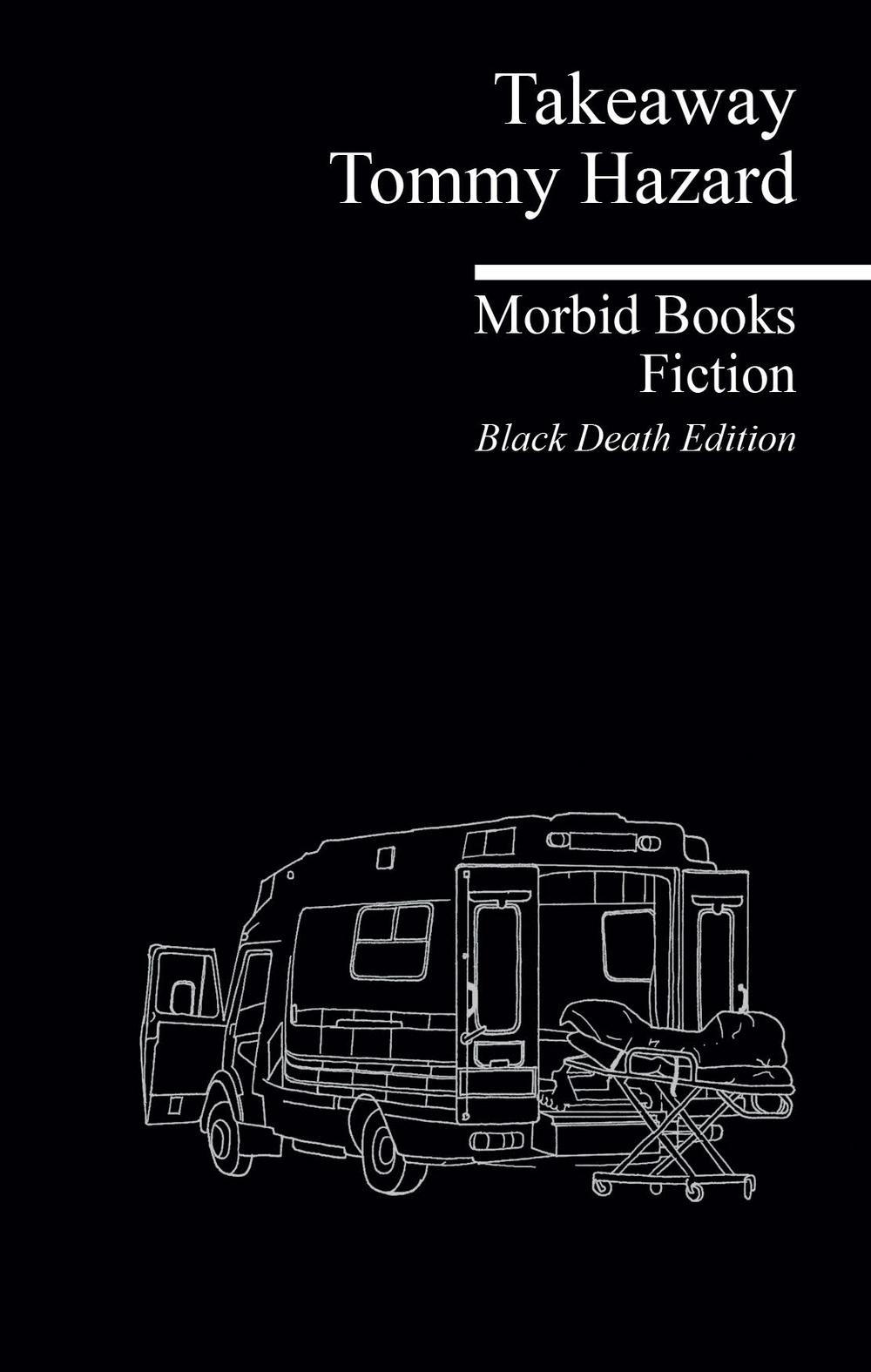